What Do the Doctors Hate about EHR

EHR, in its current condition, has created an unfavorable impression among the physician wellness community. They cite three factors: burnout, lack of work-life balance, and frustration with EHRs. The question is whether, and if so, how physician dissatisfaction can affect your business? We have tried to gain a better insight into negative effects but also find preferable EHR features. Read on to learn more!

Until recently, most physicians created their own workflows and utilized the technology as they wish. But with the implementation of the HITECH Act in 2009 to stimulate EHR adoption, many doctors are finding things a bit too nervous.

A 2016 survey found that 84.5% of physicians used EHRs but satisfaction with their systems was generally low . Participants agreed they feel frustrated with the amount of time they spent on clerical tasks. They were also reported to be at higher risk of professional burnout.

The more recent survey was conducted in March 2018 among primary care physicians (PCPs). All participants are licensed to practice in the U.S. and have been using their current EHR system for at least one month. Even though the percentage of satisfied physicians increased , key challenges remain the same.

A major contributing factor to this professional dissatisfaction is that for every hour physicians spend on direct patient care, they waste two hours on EHR data entry and other administrative tasks. This professional imbalance is a source of emotional exhaustion and depersonalization , as well as feelings of low achievement and reduced efficiency among physicians .

‘We know from a series of studies that what motivates physicians is time with patients. We want technology, but only technology that works.’
Dr. James Madara, CEO and Executive Vice President of the American Medical Association (AMA)

Indeed, PCPs spend more than half of their working hours interacting with their EHRs. Nearly a quarter of that computer activity, however, is happening after clinic hours. On average, physicians spent 5.9 hours out of an 11.4-hour workday operating with EHRs. That consisted of 4.5 hours during clinic times and 1.4 hours after work. Thus, not surprisingly, physicians are at the highest burnout risk .

Clerical and administrative tasks , including documentation, order entry, billing, and system security, accounted for 44.2% of the total EHR usage time . Medical care EHR tasks, like chart reviews and problem lists, consumed about one-third of the term , while inbox management took up 23.7% of clinicians’ time.

Belitsoft has sufficient understanding of the nuances of healthcare services. Contact us to receive timely support!

‘EHRs were not designed by practicing clinicians and are not intuitive regarding the different processes that take place during a patient encounter. Physicians must often choose between communicating with the patient and navigating within the records to enter or view relevant data. That can fragment care during a patient visit.’
Dr. Gebke said to Medical Economics

Dr. Christine Sinsky is a practicing internist and has used an EHR for more than 15 years. In our modern age, she said, increasing requirements and regulations have fundamentally changed the nature of a physician’s work .

‘Work previously done by other team members has been shifted to the physician in the EHR. Tasks that may have earlier required a matter of seconds, now may each take one to two minutes. Add this up over the thousands of individual tasks each day and it wasn’t surprising that I and other physicians began to wonder if we were spending more time caring for the computer than caring for the patient.’
Dr. Sinsky said 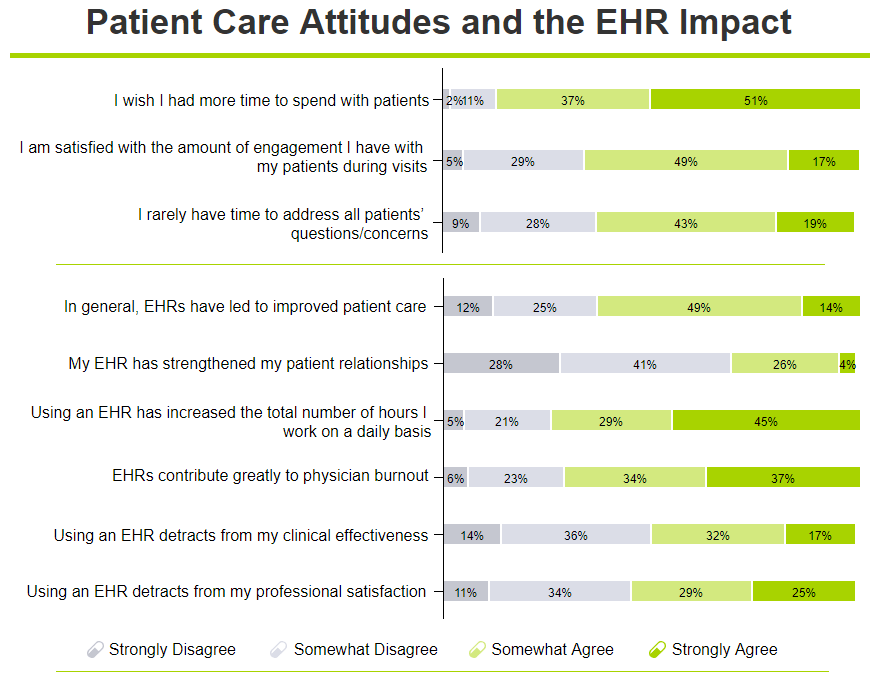 What EHRs were not expected to do was overload and frustrate physicians to suсh a degree that many specialists consider shifting careers . But recent research, published in the Mayo Clinic Proceedings, confirms that 1 in 50 US physicians is ready to leave medicine to pursue different careers.

‘EHRs contribute to burnout by turning physicians into unhappy data-entry clerks, and also by enabling 24-hour patient access without any system to provide compensation or coverage.’
Dr. Robert Wachter, professor and chair of the department of medicine at the University of California, San Francisco

Dr. Tom Davis, FAAFP, Medicare Advantage Master, left his family medicine practice after 25 years, blaming EHRs for a high burden . He noted he spent about four minutes of keyboard time for every minute of face-to-face time with a patient.

‘I had 3,000 patients, many I’ve known for a quarter century, a few hundred of which I delivered, all immensely valuable relationships — and all burned to the ground mostly because of the burdens of the HITECH Act. […] The demands of data entry, the use of that data to direct care and my overall uncertainty about how medical data was used in aggregate all helped poison the well from which my passion for serving my patients was drawn.’

According to Dr. David Barbe, AMA President, physicians burnout is increasing, thus creating a crisis that could lead to “health system dysfunction ”.

‘An energized, engaged, and resilient physician workforce is essential to achieving national health goals. Yet burnout is more common among physicians than other U.S. workers, and that gap is increasing.’
Dr. Barbe said 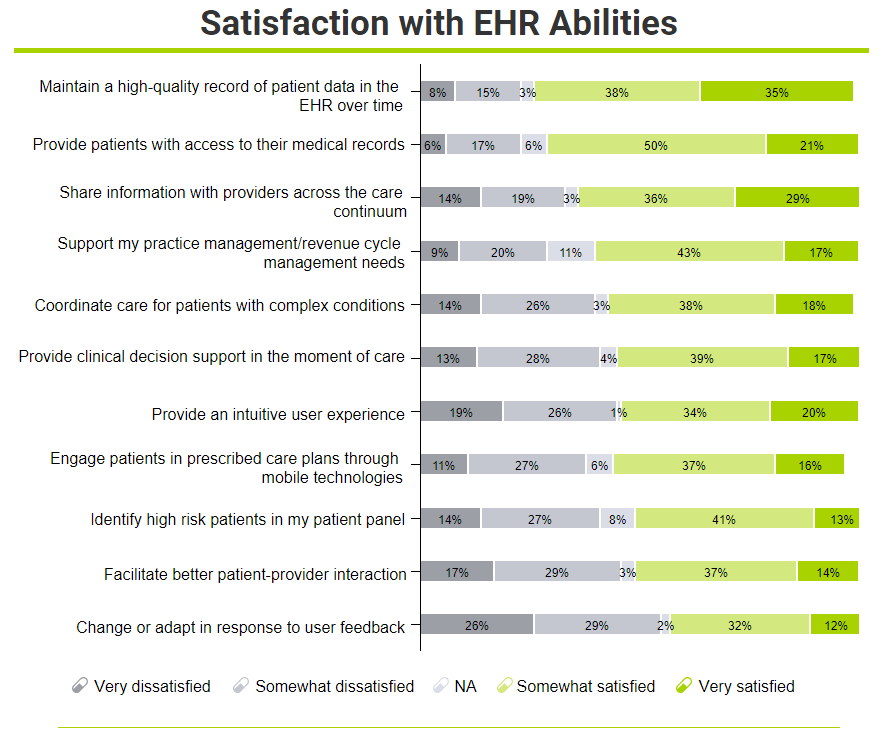 As we have mentioned before, EHRs are suffering from interoperability issues. Hence, most systems are unable to integrate patient-generated data from remote self-monitoring devices. This point is especially crucial given the need to find solutions to the tsunami of patient-generated info that threatens to overwhelm physicians .

‘Currently, we confront oceans of data, but only puddles of clinical meaning. Physicians are in that ocean of disconnected data points that seem to lack context or organization – that is, to lack true meaning.’
Dr. Madara 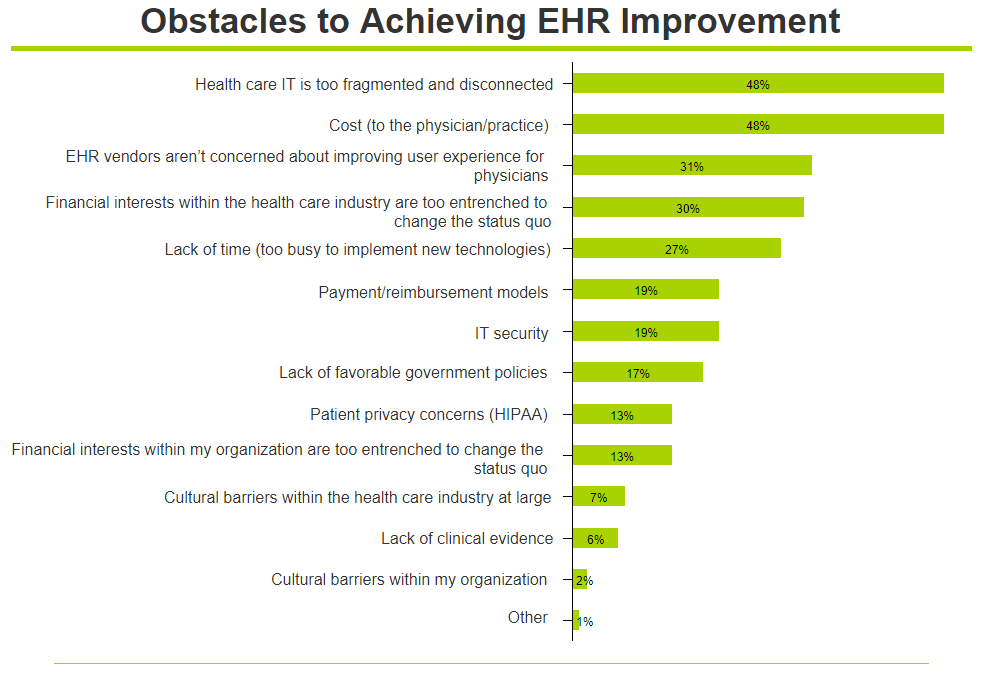 In theory, patient-generated data could be leveraged by physicians to aid in improving outcomes and patient wellness. However, the difficulty for many specialists is PHI overload , while also determining what data is actually vital .

‘Don’t come to us telling us you can upload (data) into our electronic medical record. […] They (physicians) really don’t need to know how much exercise each of their patients is getting on a daily basis; they just don’t have time to process all of that.’
Christine Folck, former Lead Innovation Designer at Kaiser Permanente

Indeed, the modern healthcare industry generates more health data than ever before. Yet some of the most meaningful data is still fragmented, incomplete, and not always machine readable . 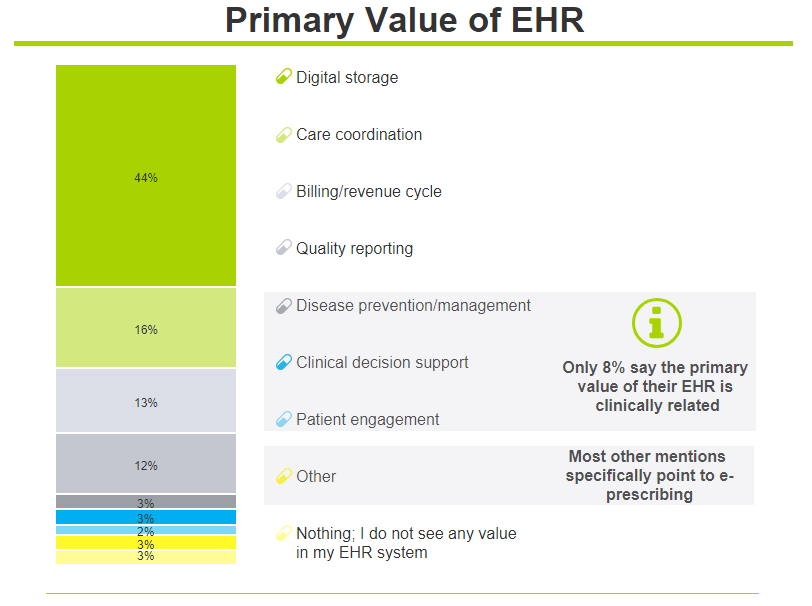 EHR undeniably has the potential to improve clinical practice, but the technology still leaves much to be desired. Today’s systems have affected the work that physicians are expected to perform and, in turn, their satisfaction. This has primarily caused a gap between the professional mission: physicians have focused less on caring relationships with patients while spending a substantial portion of their time and energy for data entry.

In the future, AI and machine learning may help EHRs contribute to the work now performed manually so that many tasks could be automated. But so far, EHR development should include vendors working closely with physicians to make the system more clinically relevant.